Take the Good with the Bad

Lots of good things have been happening lately, including new babies and big birthdays. Amid them comes the bad - hacking coughs, chest x-rays and nausea. So it's been about finding a balance and I'm so glad that I have something to balance the badness against. The good things always outweigh. 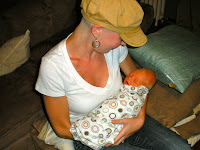 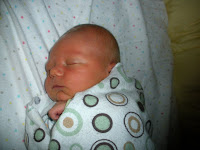 On Friday, Craig and I drove up to Mass. to meet our 5-day-old nephew, Jake Reid Diamond. He is nothing less than amazing. We're very close with Craig's only sibling, Eric, and his wife, Rachel and could not be happier for them. He is so adorable and such a good baby. We got to cuddle with him and watch his hilarious facial expressions. He has more hair than I do and the tiniest little fingers and toes.
There's nothing like the delicate preciousness of a newborn to put your own life in perspective. I can't wait for many, many more visits with the little man.
Then it was onto a day of birthdays Saturday. My little brother turned 20. This is insane to me as he'll forever be burned into my brain as an eight-year-old blondie with a bowl haircut ramming his Tonka trucks into the back of my ankle. It doesn't matter that he towers over me, I still can't wrap my brain around the fact that he's now a twentysomething. It was great to see my whole family. We played illegal jarts in the backyard and Sammy even came along to wish a Happy B-Day. She only once, maybe twice, came close to knocking over the picnic table with her long lead. Marley disasters averted. 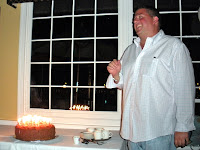 Saturday night it was onto our friend Jason's 30th birthday party at Cugino's. All of our longtime friends from Harwinton were there traveling in from California, Mass, Vermont and all over CT. We shared lots of laughs and wine over an authentic and delicious Italian feast of fried calamari, stuffed peppers, salad, pasta and chicken parm. I made it until midnight then it was pumpkin time. I dragged Craig home and slept, hard.

It was up early on Sunday to drive back up to Mass. This time for my dear friend Liz's baby shower. With some much needed coffee and the windows down the entire ride I headed up the Mass Pike to Worcester reminiscing about the hundreds of times I would make the trek from UNH down I-495 to I-290 through Worcester to visit Craig at UConn. The ride was nostalgic. I like driving by myself. I like the peacefulness of the car. I like that I can blast my music and sing to my heart's content with no one there to have to suffer the consequences. I then hitched up with four of my close girlfriends in Worcester to carpool the rest of the way to North Andover.  So together, two lawyers, an engineer, a medical student, and I were on our way. 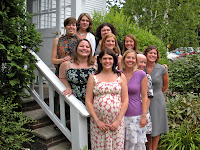 At the baby shower we met the rest of group and the nine of us reunited. We've called ourselves the "girlz" with a "z" since high school. It's stuck and so have we. I love being with these women. Everyone is fun, intelligent, successful, hilarious and huge hearted. It's rare that all nine of us can make an event - we're in many different states now: CT, NY, NJ, MA - so I was not about to miss one of the girlz big days, no matter how tired I may have been. Liz looks fantastic and the teeny baby boy clothes were painfully adorable.
Not only were my girlz there, but there was also a table full of teachers from my elementary school - Liz's mother among them. Having gone to a very small elementary school- Southwest School in Torrington, I was very close with the teachers and the Southwest community certainly keeps you in the family. There has been an outpouring of support from them since I was diagnosed and it was so nice to see them to be able to thank them in person. One in particular is a hero of mine: Suzy Kline. She was my second grade teacher and my inspiration to pursue a career in writing. She is a very successful children's book author - the woman behind Horrible Harry, Herbie Jones and other series. In class we used to get to go over her books with her as she drafted them and see the red edits and suggestions that her editor would make. She'd look to our class for feedback and draw her story ideas from her students. I thought, and still think, that she is amazing. If you check the dedication page in Horrible Harry's Secret you'll see my (maiden) name along with the rest of my fellow second graders. A small claim to fame.
We took a quick trip to Liz and Tom's home in Bedford to see the beautiful blue and chocolate brown nursery they've got ready for baby TJ. Then with a couple fruit punch Capri Suns for the road I headed back home. Our couch felt glorious to fall into.
Amid this jam-packed weekend I started developing a nasty, deep chest cough. I first noticed it on Saturday morning when I woke up shaking coughing like I was going to puke up my lung. I went to yoga and couldn't take a deep breath without progressing into a coughing spasm - quite embarrassing in a room full of calm. So I managed to train myself to take shallow breaths and got through the rest of the weekend's festivities with minimal coughing spasms. But by Sunday night when I got home after pushing myself probably more than I should have between work and play last week, I knew something wasn't right.
Monday was spent at the cancer center where I got tests of my oxygen levels and heart rate, blood work and evaluations by both Dr. Dailey and his fellow. The "hope" is that I picked up some kind of bug that has given me an upper respiratory infection or virus - easy to do as my immune system is so compromised. Dr. Dailey says that there has been a high concentration of respiratory infections like bronchitis floating around so I could have picked it up anywhere. I say that this is the "hope" because the alternative is that I have developed Bleomycin-induced pulmonary toxicity. This is a damaging of the lungs caused by Bleomycin (the "B" in my "ABVD" in about 10% of patients). I was sent in for a chest x-ray to see if there were any obvious signs of infiltrating lung disease. Turned out my x-ray was normal. This is good. So now I am on antibiotic to kill and cough medicine to suppress this bug. They cause a lot of nausea, but again, I take the good with the bad. Now we have our fingers crossed that everything continues to get better and it's not an early sign of this Bleomycin reaction. If it is, the drug would need to be pulled from my regimen to avoid what could be dangerous damage.
"I think you're going to be okay. Can I say that?" said Dr. Dailey when he called to go over the chest x-ray results.
"Yes, you can say that." I replied, smiling through the phone. 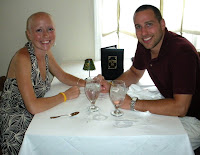 With that news it was out to celebrate our 2-year wedding anniversary. We enjoyed a fantastic dinner at Metro Bis in Simsbury, a restaurant we tried for the first time. Fantastic calamari, pita and hummus, farm fresh salads, flank steak for Craig and a South American catfish for me. Lots of protein, iron and Omega 3s. My nutritionist would be proud. Then we got home and settled in to watch our wedding video. Mind you, this is not a professional video. Craig's uncle took it upon himself to film every moment of our wedding ceremony and reception with his hand-held camcorder on the sly. The moments he captured are completely unscripted and raw. It makes it that much better. I don't know what's more entertaining - watching us share our vows or watching everyone's slick moves on the dance floor when they think no one is watching. Either way, it was great to reminisce. Priceless.
Today it was decided that despite this infection that I'm combating, I am strong enough to go through chemo after three days of antibiotics in my system. Dr. Dailey didn't feel comfortable pushing the chemo too much off schedule as we plan to be at Cape Cod next week. He doesn't want to be too "casual" about it. I agree. So here I am, ready for infusion number 7.
Posted by Karin Diamond at Tuesday, August 11, 2009