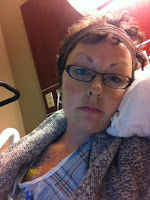 How appropriate that today is the third anniversary of my cancer diagnosis: May 8, 2009, and I’ve spent it in the Emergency Room and now as an inpatient at Hartford Hospital – the hospital at which that diagnosis was discovered. This is certainly not where I thought I would be three years later. It’s frustrating. It’s defeating. It’s confusing. It’s angering. It’s exhausting. I’m doing my best to focus on the fact that I am still here, that I am still living my life despite what this persistent disease has tried (and failed) to take from me, but it’s hard to keep that focus. This year, more than past anniversaries I admit that I’m angry and resentful. The fact that I’m in the hospital on this day is just insult to injury.

Just last night I said to Craig that I am never going back to stay in a hospital and that he’d have to drug me up significantly to get me there and my mom was comforting me by saying that even though I was feeling so awful, at least I was able to heal in my own home. Well, to all of our surprise, here I am, and I won’t be released until they figure out what’s going on with me. It’s funny how a fever of 103 degrees, writhing chills and a morning full of vomiting quickly changed my tune on the Emergency Department visit. I nearly collapsed at its doors desperate for help to make me feel better. I also came uncomfortably close to vomiting on the triage nurse.

The past few days have been very difficult. I greatly enjoyed a wedding on Friday night and a bridal shower on Sunday, but in order to do that all times other than that have been primarily spent sleeping or wanting to sleep with just short spurts of energy. I’ve had incredible body aches, swollen and achy joints, foggy headedness and incredible fatigue. Yesterday was the seventh and last day of my second round of CEPP oral chemo. It was rough. I don’t think it’s for me. Plus, I didn’t even have the Procarbazine as several errors on the part of the mail-order pharmacy delayed its delivery to yesterday, missing an entire week of treatment with that third drug of the protocol.

Yesterday was a particularly hard day. I was very weak and my body very swollen. I was also extremely emotional about approaching my three-years-with-cancer mark. It is just plain hard to look back at all that I’ve been through and the anniversary just reinforces how much I am still in the fight. All day yesterday I kept saying that I had a bad feeling about May 8, that it was going to be a difficult day. The emotions are elevated by the fact that today would have been Craig’s mom’s 60th birthday. This is hard on both of us. I felt so awful last night that I asked Craig to pick me up McDonald’s on his way home. This only happens when I feel completely disgusting and know that soda, fries and fake meat is the only thing that can absorb the unsteadiness in my belly.

After vomiting and registering a temp of 103 degrees at 5am this morning I knew I had to call the on-call doctor at Sloan-Kettering – technically I’m supposed to call at 100.3 degrees, but I thought that the 100.8 of the night before was okay to get away with. However, the morning presented some more serious issues to contend with. Not surprisingly, the doc told me to head into my local Emergency Room to be evaluated for an infection. I also spoke with my local oncologist, Dr. Dailey, who advised me to do the same and called ahead for me to get the fast track in the ED. He’s now leading my care here.

Craig took the day off from school to drive me in and be with me today. My mom came by and surprised me this evening to hang out with us. Since our 7 a.m. arrival, I’ve been cultured at every orifice: blood work from my port, blood cultures from my arm, chest x-ray, urine sample, nasal swabs – the gamut. I’ve been seen by the hematology team, internal medicine team, ED team, and infectious disease groupies. I’m just on the border of being neutropenic so this doesn’t seem as if it’s neutropenic fevers due to lack of white blood cells. This doesn’t feel like normal chemo side effects. The high fever means that there is something wrong in my body and because I am immuno-compromised the doctors need to treat it aggressively.

I’m being treated with IV broad-spectrum antibiotics to hopefully kick whatever this is. I’m also being pushed IV fluids as my blood pressure is very low. The team here will be monitoring me closely for signs of more fevers as we await the results of the blood cultures to see if there are any signs of bacterial infection. So far, all other tests have been clear. I will likely be here for a few more days and can leave once the cultures come back and I have 24 hours sans fever (so far I’ve stayed cool since the start of the antibiotics). Good news is that I don’t have to take the Procarbazine anymore. To be honest, I was probably going to refuse it anyway as I knew my body needed a break.

I am already feeling much, much better than when I arrived this morning. I’m just very tired and hope that I’m able to sleep, though I already know they’ll be waking me up every four hours for vitals checks, so a broken sleep it will be.

I don’t want to be here, but it’s where I need to be. I feel safe here. The care has been fantastic and I’ve seen many familiar faces from past inpatient stays over two years ago. It’s like a homecoming with some of the nurses and PCAs and that certainly makes things more comfortable. Plus, I’m on the newly renovated cancer floor, which is absolutely beautiful with rich décor, a big television upgrade, much comfier seating, and a private bathroom with shower.

The Emergency Department has also been completely revamped since I was there last and it looks fantastic. The comfortable, private, clean, upgraded space makes a big difference when you’re feeling real bad. It looks more like a crisply decorated home than a hospital. I have a huge window that overlooks the action of the ambulance drop off and the forecast is predicting rain for the next few days anyway, so it’s appropriate weather for indoor rest and healing. This is where I need to be. Maybe it’s been some fluky infection that’s been holding me back and once these power antibiotics kick in I’ll get back to myself again. I miss my energy.