The Urge to Run 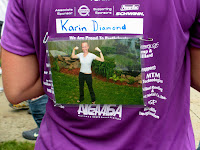 This weekend was the ING Hartford Marathon and my dear friend Nicole conquered the half-marathon selflessly and amazingly. Not only was she able to run 13.1 miles through the city, but in the process she raised more than two thousand dollars for Leukemia & Lymphoma Society. I could not be more grateful for her drive and determination. 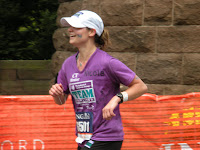 She ran with my photo on her back the whole way and I couldn't have been more proud of her. It's been very, very difficult for me to not be able to run like I used to during all of this. I'm far too weak, but to be carried by Nicole I felt like I was a part of something much larger than myself. She raced in honor of me and several others that she has encountered with her work with LLS and told me that anytime she was tired or sore she would think of what we were going through and keep on going. When I get better and try to follow in her footsteps I'll be thinking of what she's accomplished (a marathon last year only to come back after an injury to do a half-marathon this year - both times for LLS) to get through my rough spots. 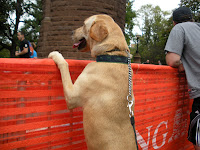 Before I was diagnosed I was registered for an informational session about the Leukemia & Lymphoma Society's Team in Training to run the marathon this year. Well, in the ultimate of ironies, I'm on the receiving end this year. Now, when I am healthy enough to run and raise money for others because of Nicole I'll be able to know so much better what it's like to be on both sides.
This year the only running that I did was chasing after Sammy in the middle of all the action when she got off leash and ended up jumping into the Bushnell Park pond after barking up the police officers on huge Clydesdale horses. Ah, the adventures never stop ... 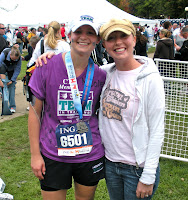 Despite that minor mishap, seeing all of the healthy bodies running for all kinds of causes or just for their own challenges was truly inspiring. I found myself choked up many times throughout race day watching people of all ages, sizes, backgrounds pounding the pavement. I was choked up at the devotion people have to the causes they were running for, at the way they honored others by pushing themselves to their own limits, and at the mere fact that close to 10,ooo people were doing something good for their bodies. Not having my health right now makes me appreciate the vast capabilities of the human body so much more.
Posted by Karin Diamond at Thursday, October 15, 2009