I wanted to travel to New York City for my most recent PET Scan by myself. All by myself. Not because I didn't have a list of people who would take me. Not because I don't enjoy all of their company. Not because I'm unappreciative. I wanted to do it to prove to myself that I could. To prove to myself that I'm still fully functioning and capable.
So, much to the chagrin of my closest caregivers, I asserted my independence like a hormonal teenager. After some push back, all involved thought it best to step back and give up as it was pretty obvious by the sugar coated bombs I had been dropping about this "evil plan" all week that no one was going to convince me otherwise. I think the fact that my travels required a 3:45 a.m. wake-up helped to reduce the insistence that they accompany me.
Travel day was also the morning after a huge ice storm, which had been preceded by another couple of feet of heavy snow. Every branch of every tree was clothed in a thin wrap of ice. Every intersection required me to inch out nearly to the median to see past the 8-foot high snowbanks that overtook every stop and street sign.
By 4:15 a.m. I was on the road. It was the pitch black of winter morning. I had to fast before my scan. Not only no food, but also no coffee. Not even a mint or a stick of gum is allowed. It was probably for everyone's well being that they were not in my company. Morning Karin on an empty stomach is something best avoided and not deserving of description.

Of course my gas tank was 10 miles from being empty – bad planning. This required a fill-up in the frigid cold – the kind that makes your lungs shrivel in fright onto your ribs and your boogies freeze to your nasal walls. All gassed up and on my way, it was only the truck drivers and me huffing down I-91 South. The truckers who insist on driving with shields of snow on their roofs that fly off with no warning like airborne video game obstacles. But I navigated like a seasoned Mario brother.

I hate driving in the dark, nevermind the snow. Plus, I'm not in the driver's seat much these days, so let's just say that the steering wheel had a firm grip and I got a lot of high-beam flashes to the rearview for driving like a granny. But slowly and steadily I made the finish line to hop the 6:15 a.m. train out of New Haven despite a slight unplanned detour around downtown and the hot, scary feeling as I turned further and further up the parking garage only to find less and less parking spaces with way too much snow between them as the clock ticked. 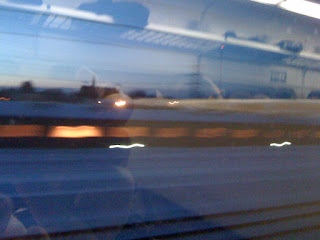 I had to kick it into a fast walk to the ticket machine and an even faster one to the platform but I didn't have to run. I played it cool amid the everyday commuters even though I wanted to rip their Starbucks cups out of their hands, drop to a knee and swig the sweet caffeine while simultaneously taking rabid bites out of their heavily cream cheesed bagels.
The train was packed, packed, packed. Metro North is on a reduced schedule as nearly half of its cars are out of service due to this ridiculous winter weather we've been having. But I didn't care how crowded it was as long as I was on it. Again, I did it by myself ... along with the guy I woke up next to when we lurched into Grand Central. It was now 7:15 a.m. I had caught the sunrise through the dirt smudged train window and the light was quite beautiful reflecting off the ice floats of the Connecticut shoreline. The morning sun also made it feel more appropriate to be somewhere besides my bed.

I was so hungry. So tired. So, so nervous about this scan. But I was doing this by myself. That is what I had wanted. Grand Central had a softness and quietness to it at that time of morning. I caught a cab with ease and began the horn-filled trek to the Upper East Side. I had built in plenty of time for traffic or other unforeseen circumstances, but my cabbie did not share my patience and coolness.

My eyes were half closed and this man's cursing at the stopped garbage truck in front of us just blended into the stagnant cigarette smoke scented air. But suddenly things got way more exciting when the tires belched under me and I look up to realize that we are plowing through a much-too-narrow snowbank opening onto the sidewalk to get around the garbage truck that was blocking the street.

"Woah ... sidewalk." I said. Surprising even myself with how nonchalant I was.
It felt like the last season of 24. A woman was pushing her baby in her stroller alongside us and the sidewalk was lined with at least a half a dozen men bustling in pea coats and scarves. None of them seemed to blink an eye at this bright yellow cab driving on their territory. We traveled at least 100 yards on that sidewalk as there wasn't another opening in the high snowbanks to cut back through. I was now wide awake and leaning into the dirty plastic shield that seperated me and the driver.

He suddenly cut hard to the left using the space dug out for a fire hydrant as a sidewalk exit. The two right wheels rolled over the sandy, salty snowbank. We landed hard then pedal to the metal to blow through the next intersection.

He doesn't even say anything about what just happened and instead asks me:

"Where you from? Westchester?"

I explain that no, I'm not from Westchester and realized that I must have sounded totally lame. A little white girl saying "badass" like I know anything about what that means. But I think maybe he liked me. Suddenly the conversation turned to the weather, Australia's cyclone, global warming, Al Gore, and how he warned us this was going to happen. I wouldn't have pinned this guy for an environmental activist with an obvious penchant for NPR in a million years. Goes to show me not to judge a book by its cover.

I stepped into Sloan's nuclear medicine department lobby at 8 a.m. for my 8:15 a.m. appointment. I was bleary eyed but beaming. I did it. I don't think the receptionist was impressed with how that pride translated into ultra chipperness. She did her best to muster a tired smile and handed me the requisite clipboard of paperwork. I slunk away to the empty waiting room and was called in five minutes later. This made the early start worth everything. Last scan I waited for 2-and-a-half hours before my name was even called. 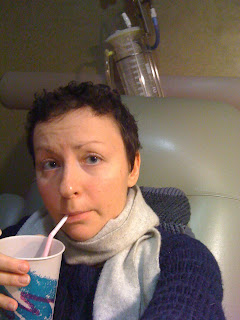 The nurses were extra attentive and the seat in the pre-scan cubby hadn't yet been warmed by other patients' bums. I drank the red drink and was injected with the radioactive contrast ... blady blah blah. By now I could run the whole damn process myself. That concoction was certainly tough to get down though having been on an empty stomach since the evening before. I did my best to pace myself as patients have one hour to finish it in, but I did a bad job of it and ended up having to chug at the end right before going in. Somehow I kept it down even though I had to be horizontal for the 20-minute scan duration. 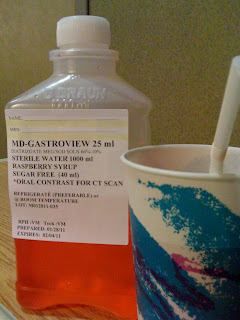 I was put in a different room on a different PET Scan machine than I'd been in before. The ceiling of the room was spraypainted in shimmery silver bursts all over. As I lay on the narrow table and was guided in and out of the tube I couldn't help but think of what an awful and obvious 1990s choice that was. Time for an update. I much prefer the new room that has a beautiful tree scene painted on the ceiling from the perspective that you're lying at its roots looking up at the sun. But this wasn't the time to be picky about artistic decor.

With arms above my head and fingers interlaced I lay still as instructed very grateful that this time I remembered to wear leggings and a sports bra – no metal buttons, no underwire – to save myself from having to endure the test with my pants at my knees and my boobs dangling free.

With every inhale I whispered in my head "ALL" and with every exhale, "CLEAR". "ALL CLEAR" over and over as I imagined my body filled with shooting white light filling every space. Sorry, no room for the gray bulges of cancer. 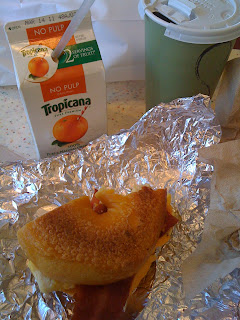 At the end of the test I dangled my legs over the side to let the blood drain back into them and I was off like a racehorse through the gates. The light at the crosswalk seemed to take ages to turn into that little white outline of a walking man. I could see the big poster picture of a bagel stuffed with all the breakfast delights at the deli on the corner taunting me, my stomach growling for something to balance out the 1,065 ml of sterile water, contrast and raspberry syrup that filled it. Soon enough that bagel sandwich was in my mouth and the heavens opened up.
I'm not sure what traveling a total of seven hours by myself for a 90-minute test proves or means but to me in that moment it was what I needed. I have a little control problem. I know that. I take the reigns when I'm with other people anyway. But my world is spinning out of control sometimes and most things I have no grip or influence on. Reading train schedule boards, finding tracks, hailing cabs are things that are predictable and in my control. So, I'll take it. It's another notch in my belt of something that I can say that I did and that self confidence will help me plow through the next challenges. I can also add a new notch for driving down a sidewalk in a cab.
After the exhaustion of asserting all of that independence though, I realized how much I prefer companionship. I bet that bacon, egg and cheese would have been even more delectable if I had someone to share it with. Same goes for gushing over the cab ride excitement.

But I had to do that for myself. For sure, I was anything but functioning and capable once I got home, especially after having to shovel the heavy, icy snow at the end of our driveway as the plow truck had blocked me out with an impenetrable white fortress.
I'm still recovering from the trip. But once I got back into my house after that whirlwind, all I had to do then was rest and wait until I received the glorious news of yesterday. Not yet all clear, but we're getting very close.
Back to the city on Thursday for treatment number three. Craig will be there by my side for whatever inevitable adventures might await us this time.
Posted by Karin Diamond at Saturday, February 05, 2011