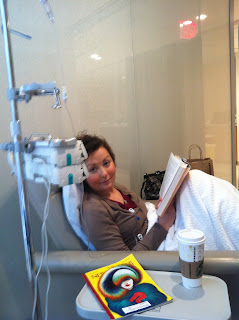 I am one round into this latest clinical trial: a combined therapy of Brentuximab Vendotin (SGN-35) and Bendamustine. The premise of this Phase I/II Clinical Trial is that the drugs work synergistically for maximum effect against the disease. Dr. O has put one person with much heavier disease than I have into complete remission and two others had impressive disease reduction. I am patient number 6, part of the second wave. I hope to add to the positive statistics.

Both of these drugs are proven to work against Hodgkin Disease. I’ve had both on their own at one time or another, but apparently there’s something about the one-two punch and the science behind that.

Each cycle requires two days of infusions at Columbia’s clinic in midtown Manhattan. The first day I received both Brentuximab and Bendamustine, the second day was Bendamustine only. Craig was my partner in the city this time around: there to hold my hand, help carry my bags, find me food, keep me smiling and entertained – all things he is expert at and for which I love him so much. He secured us a hotel with an upgrade by pulling the cancer treatment card. It was right in Times Square and walkable to the clinic and Grand Central, which made things easy.

I had been feeling so awful that I was actually looking forward to starting treatment so that I could again begin the healing process. Therefore Craig didn’t have to deal with the normal caregiver duty of dragging me to the chemo chair. In fact, my body was so spent that it needed two bags of red blood cells the day before I was to head to the city and get treatment. My hemoglobin had dropped down to 7.6, explaining my fatigue and malaise. I had to get my counts high enough to be able to safely receive the treatment drugs and qualify for the trial. With the help of my local oncologist, Dr. D, I secured the apparently “last bed in Hartford Hospital” and hurried up and waited for blood. After they drew my type and cross to check my blood type things were taking excessively longer than normal, though it’s always a slow process.

Suddenly my nurse ran into my room saying: “You had a transplant, right?” Then ran back out saying she had the blood bank on the phone.

She ran back in a few more times with further questions: “Was it with a donor? Was it your sister? What is her blood type? Where did you have the transplant?”

Obviously something was amiss. I’ve been going to Hartford Hospital for years now, they have substantial records on me, and many of the oncology nurses know me well. I have always been O-positive blood type, but that night my blood was coming back as Type A-positive. The head of the blood bank and all the big wigs were pulled in to look at my case and they re-ran my blood and discovered that in fact, my type had changed more than a year after allo transplant. Apparently, this is a very common occurrence, but not so commonly seen in a hospital that doesn’t perform stem cell transplants. Just another bizzaro piece of science. Nothing surprises me anymore.

Once that got squared away, it took two hours for each bag of blood to drip. Sweet Craig stayed with me the whole time and we were finally able to leave the hospital around 1 a.m., get to the Avon clinic later that morning to ensure my counts were high enough, and then make the trek by train into the city via a gracious ride from my mom. So, so many logistics.

As always, there is a ton of waiting at this particular clinic, but once you’re in, you’re treated with the utmost time and individualized attention, which makes the wait worth it. It’s also been great for my reading portfolio. I’m finishing a book a week.

Infusion days went smoothly. The nurse and nurse practitioner that work with Dr. O are incredibly smart, caring, thoughtful, friendly and comforting. They are close to my age and we have quickly fallen into step being able to joke around and be very real about symptoms, side effects, etc. They are excellent at follow-up and side effect management, which is huge in my world.

Craig and I cozied in my little infusion cube, me under a blanket with the New Yorker and a space heater blowing at me; Craig on the laptop catching up on schoolwork and mindless videos. The time passed as pre-meds dripped then the drugs themselves. Nothing unusual, no glitches. We only had to be in clinic for a couple hours each day, then were free to explore.

We checked out some restaurants recommended by Manhattanite friends, took in some familiar Times Square sites, tried our hand yet again at The Book of Mormon ticket lottery (no luck), and rested in our teeny boutique hotel room. Since we were walking by in the evening, we took a glance at the TKTS board and saw that “Once: The Musical” tickets were half-off. I had seen the show in previews last year and (if I can boast) said that it would be the “next big thing.” Eight Tony Awards (including Best Musical) later, it is. Craig hadn’t seen it, so we decided to splurge. Like me, he loved the music and the energy of the show. All the actors are also musicians performing with their guitars, ukuleles, cellos, mandolins, etc. on stage. It takes place in Dublin and tells the story of unrequited love and musical inspiration. It was a romantic distraction from the real reason we were in the city.

After the next day’s treatment we scored free tickets to a taping of the David Letterman Show. We’ve been to a taping before, but this time, we were profiled as “peppy and fun” and chosen to be one of the 24 people they put in the first two rows to be the “lead audience” members. I think both of our doofy smiles and geeky enthusiasm for freebies and behind-the-scenes stuff had something to do with that. Oh, how ironic it was though seeing as I was fresh off the chemo chair, still in a Benadryl and Decadron haze. But clap and cheer we did after our training session and we hope we did the show right as we laughed at Dave’s Top 10 List and enjoyed his interview with Kevin Spacey from spitting distance.

I’m not sure if it was the pepperoni pizza we had after the show or the drugs making my body angry, but I was up all hours of that night with atrocious heartburn and acid reflux. It felt as if someone took a blowtorch to my esophagus. Craig felt awful for me, listening to my moaning and tossing and turning and looked out our 17th floor window from which he spied a 24/7 Duane Reade pharmacy. All of the sudden he had his pants on and was out the door and into the 20-degree-with-gusts-in-the-teens Manhattan streets at four in the morning. Dodging drunkards and hookers, he came back with Pepcid and a chocolate soymilk that was oh-so-soothing. That’s love.

Sad to say, it’s been a downward spiral from there. The weekend was okay. We had dinner out with our UConn friends, who are always a good time, breakfast with another great friend and then watched the Super Bowl with a bunch of our neighbors. If I can get myself out and around people I care about it’s amazing how much energy I gain from that and what it does for my spirit. It’s when I’m alone that things get really tough without the distractions. I had been overly tired and starting to have some pain set in during the days but just slept a lot and accounted much of it to all the travel I’d been doing and sleep I hadn’t been getting in addition to the treatment side effects.

Yesterday morning the pain came in with a bang. I woke up with severe pain in the bones of my pelvis, hips, and sacrum. It felt as if someone was stabbing them with scissors. When I stood, it felt as my pelvis might just give out and collapse, it felt so full and swollen. My mid-back also had shooting pains and all of my joints felt arthritic. I had suddenly gone from 30 years old to 90. I tried Extra Strength Tylenol but it didn’t cut it and I knew it warranted a call.

After conferring with Dr. O, it seems that the pain I have is a good sign. It likely means rapid tumor death, which can be very painful since the disease I have is confined to such a concentrated area. All of the meds and my own white cells are flooding my little bones and blowing up landmines in there. Being that the disease is within the bone means that this process can be very painful – and it is. I worry that the bones are just going to explode.

I have always had a very high pain tolerance and an aversion to pain meds as I cannot tolerate most of them because they make me vomit and make me feel loopy. But now, I cannot function without some relief and I need to ride this out. He expects that the pain will fade after about a week or so. I’m much more accepting of pain if it means positive things are happening, but it doesn’t change the fact that it is leaving me in tears.

I’m working with the team to find some pain management options that will get me through this week without leaving me a vegetable, keeping me pain-free and not a walking ball of nausea. I’m going to be trying a patch, which seeps the medication in through my skin rather than pills as that may eliminate the GI effects for me.  I need to get over my own mental stigma that using pain meds means I am weak, because it doesn’t. This isn’t a power trip. I’m trying to survive here – one moment at a time. Relief will come. Until then, I keep remembering to breathe.
Posted by Karin Diamond at Tuesday, February 05, 2013