When there are times as a grown woman that I have to be as dependent as a newborn, I latch onto the times that I can be independent with vigor. Sometimes this causes a riff between those who want to take care of me and me, but I have always enjoyed spending time with myself and the feeling of accomplishment of doing something on my own. When I can be functioning by myself again is when I know that I’m past the peak of whatever current hurdle I’m jumping. I’ve grown up and am much better at asking for help when things get messy and unmanageable, and I’m also better at asking for no help when I know I’m perfectly fine – like a kid who doesn’t want his mom to catch him at the bottom of the slide anymore.

My pain was under control as of Tuesday evening with the placement of a pain patch on my belly. It delivers very low dose, continuous medication to manage the bone pain I’m experiencing in my pelvis and will keep experiencing until the initial tumor blow-up process is complete. It cuts the pain completely, without leaving me overly drowsy and loopy and eliminates the up and downs of oral medications and the nausea they leave me with. For the first time, ever, I have an actual pain management plan. I’m grateful I’ve made it this far without having to have one, but now that I do, am grateful that I’m with a team that has done so much to ensure my comfort.

My patch and I took the train in on our own, eliminating the need to do any driving by taking Amtrak from a more local station. The seats were comfortable, the train car was warm, and I was able to work on some writing with power and WiFi access. I dressed up in business casual clothes as I felt in a business casual mood, not a cancer patient mood.

From the Penn Station cab line, I stepped into the most Zen cab I have ever had the pleasure of driving in. Zen and New York City cab are usually pretty far apart on the relaxation spectrum. I closed the door shutting out the sounds of the insanely busy hub that is this midtown transit center and was surrounded by beautiful notes of classical music. I told him where I was headed. At the first stop light we hit, I noticed that he pulled the New York Times crossword puzzle from the console over to his lap. He scanned over the clues and I saw that most of it was already filled in.

“What a great way to pass the time at stoplights,” I said to him.

“It’s what keeps me sane,” he said, and continued to explain to me the relaxing atmosphere he works to create in his cab. “The only complaint I get is that I don’t drive fast enough. But I won’t do it; I’ll have them get out and find another cab.”

He was in his late sixties, intellectual grandfatherly looking, wearing thick frame glasses and layered sweaters. He told me how he owned his cab, so he likes to keep it in good shape rather than slamming the brakes and the gas all the time as others do. I told him how one driver had taken me on a ride right over the sidewalk when he got too impatient with a garbage truck blocking he road ahead of us. We laughed.

We talked about my writing. I explained the difference between blogging and "Twittering". He told me about his time working as a men’s clothier in the city, but how he moved to North Carolina to raise his kids.

It was like joining someone over a cup of Earl Grey. He dropped me at the clinic and told me he’d look for me at Penn Station again, though admitted that in the four years he’d been driving, he never drove the same person twice.

My 11 a.m. appointment actually commenced at 11 a.m. – and it was done at 11:45 a.m., the last 15 minutes just spent talking about the impending blizzard, the benefits of California, and skiers vs. beach bums with the nurse and clinical research coordinator. The team had to do vitals, a visual check-up and take lots of bloodwork from me as part of the protocol. It was smooth and easy. All blood counts look great.

I confessed my worries and insecurities about being on the pain patch to the nurse. I told her I was worried that with each lasting 72 hours, what if my pain goes away and I’m covering up nothing? What if I get addicted? Should I try to stop it, see if the pain comes back, then wait another 13 hours for a new patch to kick in? She calmed me by looking me straight in the eye and saying:

“Do you feel okay? Are you pain free?”

I nodded in agreement. It was as if I felt I wasn't entitled to that.

“Then just go with it,” she said and told me that with all that I have to worry about, being addicted to pain meds is the least of it. I am on a very baby dose and those that get addicted are those that are using drugs without having any pain. These pain patches are much safer than popping lots of pills as it keeps things controlled and consistent and not so harsh on the body. She explained that these drugs are built for pain like mine and help calm all the receptors that go off when the body is experiencing pain so that I can sleep and eat and heal, which is very important.

“So just relax, let it go, let’s not do any experimenting right now,” she told me, knowing that I’ll be traveling to San Francisco next week. I can breathe easier after our little talk and am accepting this help that my body needs right now. I know it’s eliminating lots of physical and mental stress, which is certainly a good thing.

With three hours to kill before my train home, what was a girl to do on Fifth Avenue in mid-town Manhattan with a 3-story H&M right there on the corner? I lunched on a Panini then settled into the H&M racks for some retail fun, including the purchase of a $15 pair of bright pink pants that make me smile. I then decided to walk the 20 blocks, 2 avenues back to Penn Station. Sweaty from carrying my laptop on my back and with tired muscles, I grabbed a protein power smoothie and sunk into my train seat where I promptly fell asleep.

Today has been beautifully lazy huddled in for the "Blizzard of 2013" with Craig and Sam Dog. Nowhere to be. Lots of entertainment to be had from local newscasters reaching for new ways to say the same thing and their use of ridiculous visuals to illustrate the conditions. There's cookies to be baked. Candles and blankets at the ready. Everything we need. 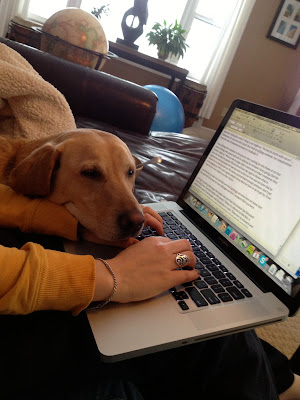