Research Study for One

Last week, Dec. 23, was a big day and turned out to be a great day. After the much shocking and regrettable news from a few days earlier that my PET Scan was not the crystal clear gem we had hoped for, the news we got from the doctor on this day was much easier to swallow. 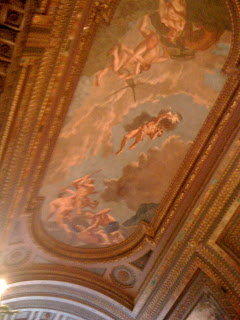 My mom and I took an early train into NYC to be able to enjoy some exploring surrounding what would surely be a comparatively short Sloan appointment. I had a lot of energy (and a huge appetite) due to the daily 100mg of Prednisone I had been taking to calm the Hodgkin's symptoms until SGN-35 could be secured. We meandered uptown from Grand Central and stumbled upon the New York Public Library – an institution neither of us had ever explored. We ducked in and I was immediately in love with the ornate arch detailing, the marble columns and stairs, the intricate and stunning paintings that canvased the rotunda ceilings.
We explored a few floors taking in the massive ceiling to floor windows encased in deep mahogany trim, which shed a cool winter light onto the dozens of people that lined the long library tables with their noses in books and study materials. I ran my fingers along the worn cloth spines of Lord Tennyson, Dickens and Tolstoy – faded jewel colors of scarlet and emerald, the titles calling out in delicate gold lettering. I opened a couple to finger the years-worn pages and ingest the deliciously musty smell that only an old book can emit. 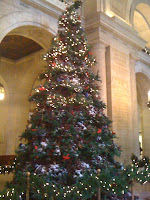 Stunning was the holiday tree in the library's entranceway, a towering figure decorated with artificial birds of all colors peeking out from behind Victorian bows and lights. Behind that we stumbled upon a fascinating special exhibition, "Three Faiths," which compares and contrasts the traditions and beliefs of Islam, Christianity and Judaism by looking at the religion's ancient texts, materials and art. It was remarkable to admire these historic printings from the tiniest of Korans to Hebrew texts complete with engrossing hand painted illustrations. From behind the glass encasements, each told a story about the many sets of hands that wore their covers thin, and whose pockets they traveled the world in. 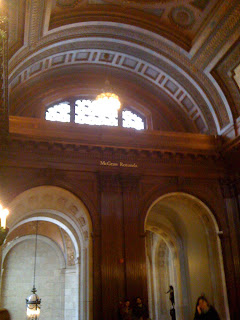 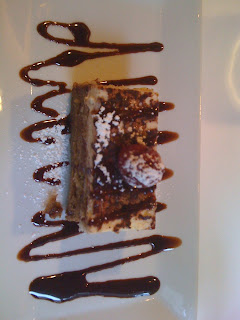 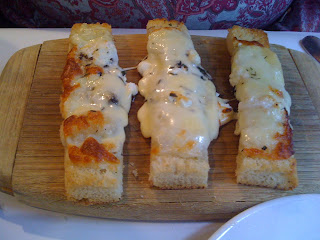 To take a break from all the technical jargon and to celebrate the news that I qualified for this drug, my mom and I indulged in some NYC eats and another dose of culture. We cannot remember the name of the Italian restaurant we found on 57th and 11th, but will never forget the food. We stepped in from the bitter cold December wind to enjoy a three-course prix fixe menu, eating such decadence as gorganzola cheese bread, flaky salmon swimming in lemon and butter with the perfect carmelized crust, and classic liqueur soaked Tiramisu for dessert. It was a ladies' lunch to remember. We clanked our water glasses a few times as we enjoyed the perfect people watching perch at our window side table. Then we lost ourselves in some mind-bending exhibitions at the Museum of Modern Art. We had acquired some free passes, so the fact that we only had a short time to explore didn't elicit admission fee guilt. Days and days could be spent traversing the place. We only saw a very small fraction, but it was awe inspiring nonetheless. We saw Dalis, Picassos, Seurats, Van Goghs, Monets, Chagalls, and works by many, many burgeoning photographers, painters, and sculptors ... even an exhibition of Andy Warhol film clips and a musician playing the piano from the inside out and backwards while walking it through the performance space. The museum was swarming with visitors taking photographs, leaning in to and stepping back from works, speaking languages of every dialect. It was a regular world melting pot of art lovers and my mom and I couldn't have been more thrilled to be there. 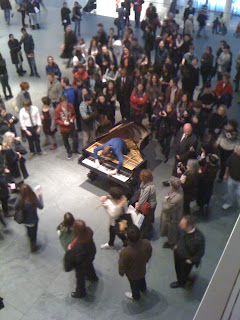 We took a brisk walk back from MoMA to Grand Central navigating through the slews of holiday tourists that packed the mid-town stretch. After sipping our coffees and nibbling our baked goods, my mom fell asleep and I delved into my book as the train rumbled us back to the station where my Dad's warm car waited to take us home. We were content, tired, and exhilarated all at the same time. It was almost Christmas after all ... . 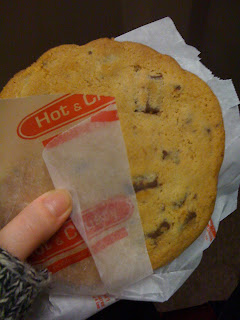 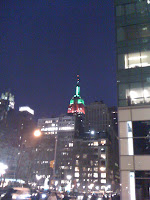