It's been one week since I received the word that the Hodgkin's had relapsed. I can't believe it's only been a week as so much has happened since then. I felt like I have literally been swept up in a tornado of medical terms, doctor appointments, disability paperwork, financial assistance paperwork, sign-your-life away paperwork, faxing, making more appointments, drugs, science, and overbearing overwhelmingness.
At the advice of my oncologist, for my own sanity, and for practicality reasons, I've decided to take a leave of absence from work which started today. So last week was a frenzy making sure that I got everything in order, "brain dumping" to my team, and dealing with the difficult task of breaking the news to everyone that yes, my cancer is back. However, making it so much easier, is how tremendously supportive my immediate co-workers and the extended hospital "family" that I work with are. I know I need to focus solely on making this next course of treatment as successful as possible and that my number one concern needs to be my health and well-being and everyone is standing behind that 100 percent.
I've been a bit aloof this past week, but it's not that I've been curled in a ball crying "why me?", but more that I've had to get my ass in gear and get all of the next steps in order. With the blessing of Dr. Dailey and the new oncologist I'll be seeing down at Yale New Haven, Craig and I have decided to freeze some "Craig and Karin" popsicles - or embryos to be more scientific. On Friday, we started the IVF cycle process, which was overwhelming to digest at first, but now that we're into it, it's going smoothly. This will delay the start of my chemo treatments by about 2-and-a-half weeks, but my medical team was comfortable with that timeframe and very encouraging that we take this step as having a family in the future is so important to us. 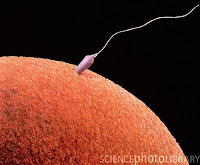 The high-dose chemotherapy regimens that I'll be going through are very likely to leave me sterile and put me into pre-mature menopause. So, as an insurance plan, I'm being injected with hormones to force my ovaries to release many, many more eggs than the one that women do each month. Then I'll have a mild surgical procedure where they'll go up there and extract the eggs from the follicles via needle, put them in their little petri nest, then Craig will have to - ahem - "produce," and one of his little guys will be placed directly into each one of my eggs through a procedure called ICSI. (I'd like to request that they play Marvin Gaye in the lab to make this a little more romantic). They'll watch the action and then however many of these Craig-and-Karin combos fertilize and create eight cells toward babyhood will be frozen through cryopreservation and stored for us under careful watch. After I get through this and my body is ready to conceive we'll thaw Frosty and friends and are hopeful for a successful pregnancy with our 27-year-old embryos. If for some reason I lose the capability to carry a pregnancy, the frozen embryos allow us the option to have someone else carry the pregnancy for us if need be. So we've got lots of options. 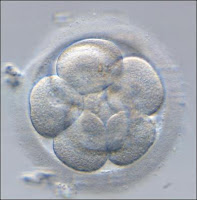 The IVF process is quite complicated, especially when you're trying to digest the idea of an impending stem cell transplant at the same time. The team at The Center for Advanced & Reproductive Services at the UConn Health Center has been fantastic so far and my endocrinologist is brilliant beyond words. However, I never knew how little I understood about my own female anatomy and never knew how much of this process would be in our hands. We have to do the injections ourselves at home. Craig and I sat through a one-on-one class with the IVF nurse who taught us how to fill the syringes, mix in the powders, switch out the needles, measure the correct cc's, flick out the air bubbles and stab into the skin. I sat there dumbfounded and on the verge of tears. I can't fathom jabbing myself in the stomach with a needle, never mind trusting myself to measure out the right amount of meds and mix what with what. Math was never my strong suit. Chemistry? Forget it. And after so, so, so many needle sticks I've had to endure over this past nine months I'm certainly woozy around them.
Luckily, my husband loves it. He was fascinated by the meds. He picked everything up right away and totally gets it. I told him right then and there in the "training" room that I would be useless for this part of it and that I'd be completely relying on him. After joking that he was going to sneak up on me and jab me in the shower when I had soap all over my face, he assured me that he was confident and that it was the least he could do.
To make matters more exciting, we had to do the first set of injections in the family bathroom at Mohegan Sun casino. You need to inject at the same time every day - a.m. and p.m. - and only have a one-hour window of leeway. We already had plans to go there for my grandmother's birthday and it fell right smack in the time that we'd need to be doing the injections from that point forward. But with plenty of alcohol swabs and Craig's steady hand, we made it happen. One injection of Follistim. One injection of Menopur. Each in a pinch of flab on either side of my belly button. The needle doesn't hurt as much as the hormone meds burn going in, but it's all for the bab(ies).
I can feel my ovaries swollen and I'm a bit bloated and very tired - from everything, I suppose, but other than that feel okay. I haven't grown horns yet, but then again, it's only been three days of hormone meds. I'll be going in about every other day for blood work to check my hormone levels and see when my body will be ready for the "trigger shot" which will release the oocytes then the hope is that retrieval will be scheduled for Feb. 17. We'll start the chemo the following week - more to come on that.
My night sweats have come back with a vengeance soaking through my clothes and wetting the sheets waking me (and Craig) up throughout the night to a puddle of dampness and the stench of my own B.O. To combat this, and the achiness I've been feeling as the Hodgkin's encroaches, I've been prescribed a course of the steroid Prednisone. This will help to slow the cancer activity while we undergo the IVF process and it will help squelch the "b" symptoms I've been having like the night sweats. I'm on a pretty high dose right now but I'll be weaning off it as the week progresses. So far, no side effects from that.
I went into the cancer center today to have my port flushed and that was difficult. I saw all my old nurses and lab techs who were there to rejoice with me when we find out that I was in remission, but this time they burst into tears as they learned that it was back. I got a lot of hugs and a lot of encouragement, but by the looks on their faces, I know that this isn't going to be easy. I've just got to take it day-by-day, one step at a time.
Posted by Karin Diamond at Monday, February 08, 2010